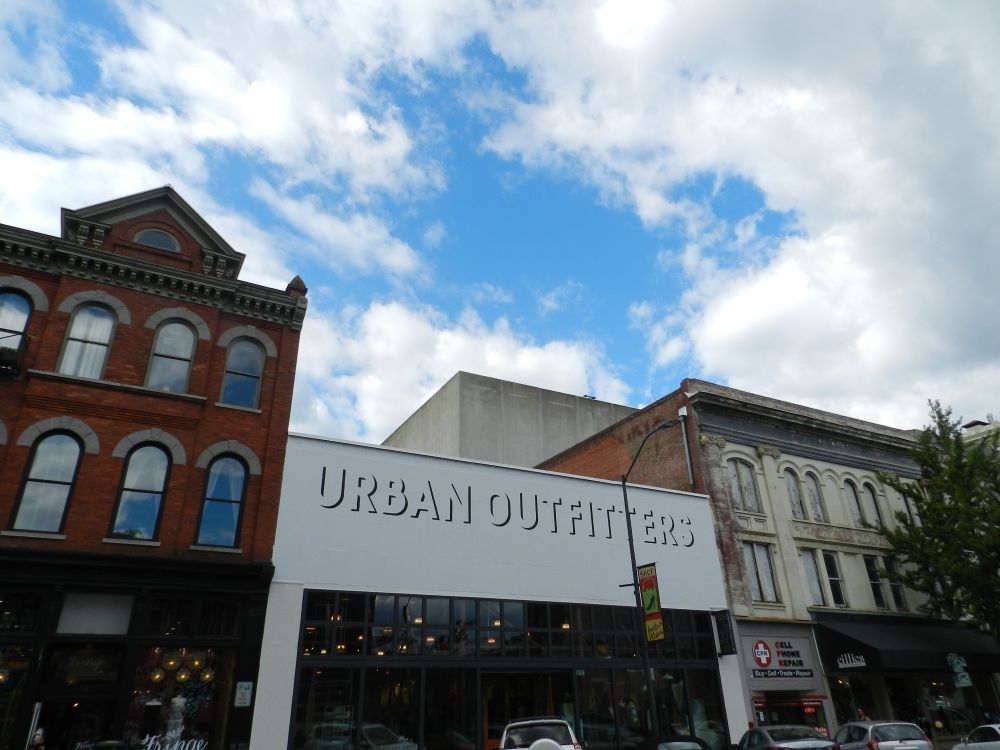 Following a previously reported public opinion piece by Flagpole, owners and experts are conflicted about whether local boutique owners are negatively affected by the opening of Urban Outfitters downtown Athens in the early fall of 2015.

Owners, such as University of Georgia graduate Katie Jacobs, believe their stores may actually be experiencing positive benefits from their new neighbor. Her boutique Cheeky Peach has found a way to expand her store in the past year, after the opening of Urban Outfitters. Jacobs said that customers who might not typically shop in the local boutiques may now be driven to visit downtown by the big national name, and they may stumble upon Cheeky Peach or other boutiques like it in the process.

On the other hand, there are local boutique owners who still have concerns about the possible impacts of large corporations on small business in Athens. Sanni Baumgartner, owner of Community – a clothing store downtown that sells exclusively Georgia made and vintage clothing, as well as offers alteration and sewing classes, claims that the downtown retail scene has changed quite a bit from when she first arrived in Athens.

“Downtown Athens is not what it used to be 10 years ago when it was almost exclusively locally owned businesses. I still remember when I first moved here and the GAP was still downtown, but it seemed like at that time all the bigger stores and chains moved to the mall,” Baumgartner said.

Community was in the process of moving into a larger and more visible space on Jackson Street and out of the area above the Jittery Joes on Broad Street when news broke that Urban Outfitters was planning on coming to downtown Athens. Baumgartner pointed out that around the time Urban Outfitters arrived, she noticed smaller boutiques like Flirt and Encore closed down, while larger chains such as J. Crew and Dress Up moved in.

“We just moved to the new location and our sales have gone up so much that it’s hard for me to compare that to the previous years. I don’t think [the opening of Urban Outfitters] had a huge affect on us, but it might have had more [of an affect] on other boutiques. I definitely saw some boutiques closing shortly after. I don’t want to draw the conclusion that Urban Outfitters put them out of business, but from the outside that’s what I saw happening,” Baumgartner said.

Retail experts agree with points from both Jacobs and Baumgartner. Clair McClure, an associate professor and internship coordinator in the department of Textiles and Merchandising at the University of Georgia, claims that large global companies can bring not only new exposure to the Athens retail scene, but give students more job opportunities as well. According to McClure, students now have the option to work for either a small business or a large corporation when searching for a retail job downtown, which can lead to two different career paths.

“I actually thought it was really cool when Urban Outfitters decided they were going to come here. I thought, that will open up opportunities for our students to work there. It’s a cool company and I know it’s one that people really enjoy. They hosted an internship recruiting [program] out of [Urban Outfitters] last year that I helped promote and I was happy to do that,” McClure said.

The introduction of a large corporate chain such as Urban Outfitters in a predominantly small business-centric town is not a new phenomenon in Athens. McClure still remembers a time when JCPenney was once a major business downtown. Long before Urban Outfitters painted its name across the space at 155 Clayton St., a GAP store stood in its place. Its doors were closed in mid 2001, according to a press release done by Online Athens.

However, rent prices for spaces downtown have increased in the last few years, a trend attributed to the arrival of large retail chains.

“I had been looking for a while for a [new] space and I was scared off by how high the rents were on Clayton Street, to the point where I was worried that we would go under. It seemed like the rents were increasing dramatically just in the past 2 or 3 years since I started looking and that is something that I think is hugely affected by the fact that chains are interested in moving in. They just have deeper pockets in that way where if they have a couple slow years in downtown Athens its not going to put them out of business, but for a local business like us we couldn’t survive that. That has a big affect on unfortunately driving local businesses out of downtown and I have seen it happen where landlords are literally doubling the rent on [local businesses] simply because they can,” Baumgartner said.

Baumgartner is nervous that the rents will go so high, that small businesses, like Community, wont’ be able to afford being downtown. However, she stays hopeful that the city might look into giving incentives to landlords to rent their spaces to local businesses.

“I think the large chains can have both positive and negative aspects, because they will attract people to our community and keep Athens growing. However, I don’t think they give back as much or get as involved with things on campus as much as the local boutiques do. For example, I just recently did a project on Sanni Baumgartner and Community for one of my fashion classes and she was so helpful and willing to meet with me and hear my ideas. I don’t think Urban Outfitters would let me do the same,” Foernsler said.

In the end, McClure warned that there are always set backs when dealing with larger corporations, including less community involvement and less willingness to respond in a timely manner. McClure argued that large retailers generally follow the ebb and flow of the business cycle and will gladly close their doors to chase the next hot retail spot when and if their popularity in Athens declines.