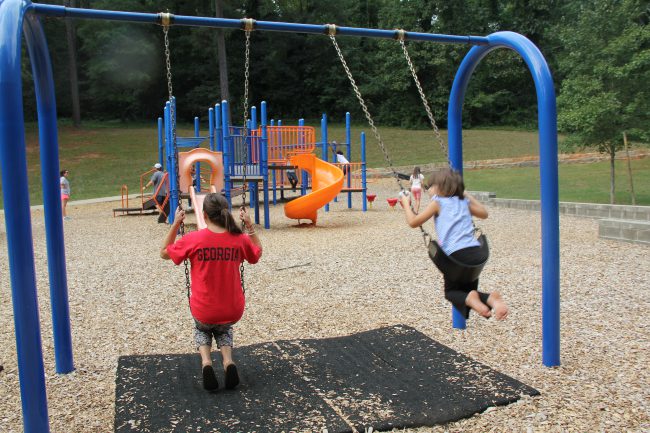 Athens, Georgia – Although election polls predicted a deadlock race in Georgia in 2016, Republican nominee, Donald Trump, won the state 51-45, but political experts still agree the peach state is on a path toward purple.

Georgia has not “gone blue” since Southern Democrat, Bill Clinton, took office back in 1992, making 2016 polls rare and enticing. But Ryan Williamson, a PhD candidate studying elections, warns to take election polls with a grain of salt. “Polling is really finicky,” Williamson admitted. “Polling is exciting, but at the same time I think it can be misleading sometimes too.”

Dr. Charles Bullock, a political science professor at the University of Georgia, knows this all too well. Many of the earlier polls were conducted right after the Democratic National Convention, he noted, thereby giving Clinton a deceptive advantage. He also mentioned speculation occurring in the political science world known as “the bashful Trump voter.” The phenomenon assumes Trump supporters were less likely to respond candidly to the polls, if they even agreed to respond at all. Moreover, Bullock warned that people may not have necessarily voted for Trump, but it may have just been a vote against Clinton.

“Hillary Clinton is not a good candidate.” Bullock admitted. “She’s not charismatic, she’s not inspiring, and so if she had to compete against, say Marco Rubio or John Kasich, I think she’d have been blown away.”

Dr. Barry Hollander, a professor at the University of Georgia teaching an undergraduate course on public opinion, agrees. Clinton was not an exciting candidate, he said, and noted her inability to galvanize voters in a way that got them to the voting booth. She had the experience, he said, but that was part of the problem. The people wanted change and the 2016 exit polls proved it. In fact, this year’s exit polls showed that 4 in 10 Georgians thought the most important quality in a candidate was his or her ability to bring about change. Of those voters, over 80% voted for Trump.

Trump’s message resonated with many Americans that felt left out, Dr. Hollander explained, especially those in the white, working class. In fact, even after Trump’s crude and misogynistic comments, exit polls showed Trump was still able to secure 70% of the white women vote in Georgia, a whopping 44% higher than Clinton. Though some of the exit poll results may seem surprising, Hollander admitted, with hindsight they are not that hard to believe. People have an incredible way of looking past things, he noted.

Despite this year’s results, not all hope should be lost for Georgian Democrats, Bullock admitted. Just twelve years ago, he said, there were only 3 blue counties in Metro-Atlanta: Fulton, DeKalb, and Clayton. Obama added three more to it in 2008, he said, and this year, both Cobb and Gwinnett went blue as well. It was the mountain counties where Trump got the victory, Bullock admitted.

“The state itself will turn blue or turn purple when the urban vote outnumbers the rural vote,” Bullock predicted. “I think we will start seeing that in the 2020’s.”

Jamie Carson, a political science professor at the University of Georgia who specializes in American politics, said that these demographic shifts are not usually mirrored in the voting booth. The issue, he explained, is that the demographics of the state are actually quite different than the voters of the state.

“Demographics are improving for the Democrats, but the turnout still reflects more of a Republican pattern,” Carson said. “You’d have to increase voter registration rates and participation rates among African Americans and Hispanics–and then they all have to turn out.”

In fact, Ryan Williamson, a PhD candidate studying American elections at the University of Georgia, said that lower income voters, minority voters, and younger voters are all significantly less likely to show up at the polls than their more conservative counterparts. However, he still believes that these demographic shifts will mix Georgia’s red and blue voters together in the future.

“Demographic shifts are contributing to a more purple-ish Georgia,” Williamson admitted. “But that appearance is being exaggerated by the presence of Trump. I don’t know that we’d see that close of a race with a more popular Republican candidate.”

For more, click here to watch a video about this story or watch below.