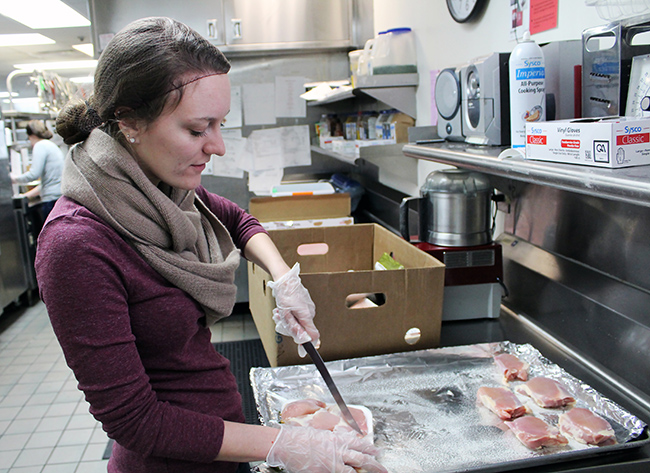 ATHENS, Ga. – Campus Kitchen at the University of Georgia distributed 25,000 pounds of food to food insecure households and food banks around Athens last year, according to the program’s website.

The organization recovered more than 43,000 pounds of food from local grocery stores and gardens, such as UGArden, which they used to provide weekly nutritious meals for their clients and then redistributed unused food to related programs in the area.

“Our model is built on creative food sourcing,” said Brad Turner, the program coordinator for the organization at UGA’s Office of Service Learning. “We work together with lots of local companies and organizations to build a reliable network that ensures there is as little food waste as possible.”

Campus Kitchen sends out about 13,000 meals a year made up almost entirely of donated food, only spending about $300 dollars on supplementary food annually.

Brad Turner, the program coordinator at Campus Kitchen, discusses the Campus Kitchen five step process and how each step is essential to the organization’s weekly operations in the audio story above.

The hidden faces of hunger

Although Campus Kitchen aims to alleviate food insecurity among all demographics, Turner said that seniors raising grandchildren were a lesser known group in need of hunger relief.

“It’s a very strained family dynamic,” Turner said. “You’ve got the stress of being grandparents and raising children a second time — often at an older age — and both groups are constantly reminded of the missing generation between them.”

Senior mobility affecting food insecurity is a prevalent issue that is often overlooked. Something like hauling heavy bags of food from the grocery store — which may seem routine for someone in a younger demographic — is much more taxing for an elder individual, according to the organization’s president, James Haverly.

“I think people forget that getting to the grocery store and to restaurants is a lot harder when you’re older, especially when you don’t have a car,” Haverly said. “And although Athens Transit is award-winning, it’s still centered around getting people downtown, opposed to places where these individuals could get the food and help they need.”

The graphics above depict the distribution of senior food insecurity in the United States by age, gender and employment status. The information displayed in these graphs was collected by Feeding America in a 2015 study. In the ‘By Employment’ graph, to the most right, Feeding America categorizes ‘Disabled’ as being “unable to work due to having a disability;” those categorized as ‘Unemployed’ are not working due to other reasons besides retirement or disability, such as lack of available transportation. (Data Visualization/Rachel Marie Grace, rachelmariegrace.com).

Jerry Shannon, a professor of geography and financial planning, housing and consumer economics at UGA, said that seniors that can’t afford assisted living or have families to help take care of them are a uniquely vulnerable to the hardships of food insecurity.

“Because of general health concerns and reduced ability to walk, drive or take transit, seniors often can’t work to provide for themselves and are isolated from the community in ways younger generations aren’t,” Shannon said. “It’s just a lot harder for them for many reasons.”

Campus Kitchen works with the Athens Community Council on Aging (ACCA) and related organizations to assess the needs of food insecure seniors in Athens and make existing programs as purposeful as possible.

Government programs are often seen as the main way to combat food insecurity long-term, but it can take years to advocate for and implement these kinds of policies, so many hunger relief organizations choose to focus on alleviating the immediate needs of food insecurity.

However, Campus Kitchen has concentrated on more long-term goals such as increasing nutritional awareness and decreasing isolation among food insecure individuals, as well as educating them about resources such as the Supplemental Nutrition Assistance Program (SNAP).

In the past year, they’ve hosted eight community dinners at Denney Towers Assisted Living, assisted in multiple SNAP applications, helped found a garden club with the ACCA and coordinated 252 ‘Lunch Buddy’ visits between volunteers and clients, according to the program’s website.

In the video clip above, Campus Kitchen shift leaders Shreya Taylor and Apoorva Kommajosula break down the delivery process and the impact of interacting with clients.

Based on results from a survey conducted by Campus Kitchen last year, the majority of their clients — upwards of 83 percent — have reported an improvement in mental, physical and emotional health as a result of these programs and meal assistance.

But Turner said there is a still much work to be done.

“Sometimes in the summertime I’ll go and deliver to a client’s home and see that they have all the lights off to keep their electric bill down and the fridge is empty, and it just hits me that my work is never going to be finished,” Turner said. “It’s incredibly challenging, but also incredibly rewarding and I’m so thankful that I get to be a part of it all.”

Campus Kitchen plans to continue working with partner organizations over the next year to expand existing programs and create new ones that will provide lasting solutions to food insecurity in Athens.